The September 19th precision  attacks on  the  oil processing facility  at  Abqaiq  in Eastern  Saudi  Arabia  have raised many questions for the Saudis and their allies in  UAE, the United States and Israel. How did the attackers ( whether they be  Houthi, Iranian or  Saudi  dissidents or a combination of any of those),manage to  breach  what  should have a very  well protected  site from  air borne attack.

The attacks should not have come as a surprise however.  The  Houthi  “rebels’ in Yemen  (against  which  the Saudis  and their British, U.S. , Al Qaeda and UAE allies  have been conducting a barbaric  war of attrition for the past  4 years ) have both  threatened and carried out increasingly  ambitious attacks on Saudi  infrastructure  in  the past year with  drones and missiles to  varying effect. (note the map below showing earlier Houthi  drone  attacks on the oil pipeline leading to  Abqaiq.) 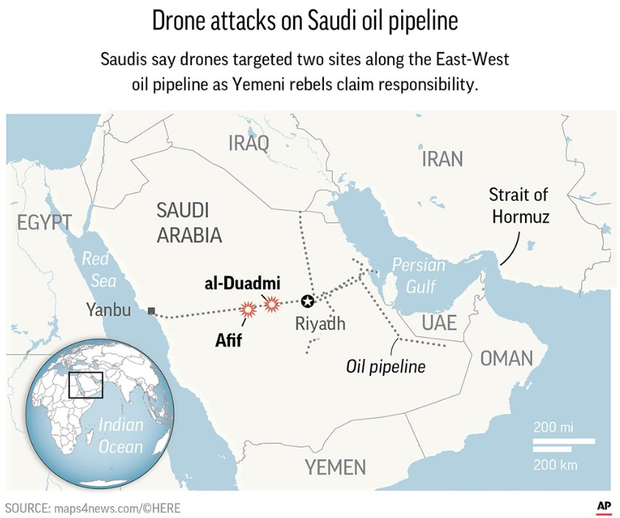 Recent  news releases from  the Houthi  indicate major military  successes against  the  Saudi  mercenaries on  the front line.;  and the latest  report of 500  Saudi  mercenaries  killed and  2000  captured  in  ongoing  Houthi/Yemen  Army raids into  Saudi  territory  is  outlined here.

The U.K., France and Germany have all joined the chorus of condemnation of Iran  from  the Saudis and United States  for the  Abqaiq attacks, despite any evidence. As noted in  previous blogs here ,  the ability of the Iranians to  ship   quantities of large missiles and drone components to  Yemen  through  a very  tight naval  blockade of its ports and coastline  is problematic to  say  the least. That  blockade  is part of the deliberate  humanitarian  disaster  that  the Saudis and their allies have inflicted for 4 years  against   the population of Yemen. That genocide  is compounded by the deliberate  bombing of civilian  infrastructure  with  active  military support  and coordination by  the British  and the Americans. Those actions are war crimes on a  massive scale.

Going back  to how the Abqaiq could have possibly happened; given the massive investment the Saudi  clan have put into  war  machinery  from the U.S.  and U.K. , Craig Murray  notes: Saudi Arabia’s entire weapons capacity is massively focused on Iran, as are the manifold detection devices of the numerous US bases. Besides modern air defence systems are omnidirectional

The Patriot missile defence system is not the best in the world, though it is the most expensive; however you cannot just creep up behind it and shout “boo!” Not even the Saudis would pay billions of dollars for that.

So  if by  some absurd chance , what  Western  governments are saying is true;  how did the Iranians fly drones and missiles  at  Abqaq from  across the Persian  Gulf directly in  the face of large  batteries of Saudi  and American  air defenses? The analysis by “Juliet Guy Oscar” clearly shows that  Houthi   manufactured Quds1 cruise missiles have both  the capacity and range to  have attacked Abqaiq and beyond.

The Americans, using brutal  sanctions, theft of Iranian  assets  and threats, want to   bludgeon  Iran into  both  pulling back  on its extensive and very  effective missile programme,  and its support for   its local  allies in Syria, Lebanon, Yemen  and Palestine above all. As E.J. Magnier notes- pulling back  on  either of those two  programmes is simply not an option for the Iranians.

For  U.S. Secretary of State  Pompeo  to  state  that “the foreign minister of Iran is threatening all-out war and to fight to the last American,(and) we’re here to build out a coalition aimed at achieving peace and a peaceful resolution to this,” is of course pure nonsense and lies. America wants to  make Iran once again a client state like the Saudis , Egypt  or Jordan,  which  can bend to  the expansionist  whims of the Israelis.

While its very  likely that  the Houthis have  been using and adapting Iranian  missile and drone technology, the evidence suggests that  the Yemen military,  supported by  the Houthis,  have also been  making their own or adapting  military  equipment salvaged from  the Saudi/UAE conflict – with  perhaps technological advice from Iran.

The Saudis,  amusingly enough,  cannot believe that   Houthi  “savages” could  develop  and  deliver such  weapons. ( the  same kind of sad racist  mistake that  the Americans have continuously made against  the Russians, Chinese,  North Koreans and many other nations. (“If they   have such  weapons then  they must  have stolen the technology  from us”.)

The Yemen ‘rebel’  commentary on  the attacks is however interesting,  noting that “various kinds of combat drones were used in the Second Deterrent Balance Operation, noting that they were launched from three different locations according to their flight endurance and designated targets.   He underlined that the third generation of domestically-designed and -manufactured Qasef (Striker) combat drones, long-endurance Sammad-3 (Invincible-3) drones – which have an operational range of 1,500 kilometers to 1,700 kilometers and newly-developed drones equipped with jet engines.

Each of the new drones can carry four precision-guided bombs with fissionable heads every time, and can monitor and hit their targets from several angles.“Other aircraft were also used so the main combat drones could hide in their shadow without being detected, and signal jamming devices effectively disabled the enemy’s air missile defense systems.”

Like the Iranians,  the Houthi  and the Yemen military are fighting for their survival  against  much better equipped and financed  opponents. Opponents whose  ruthlessness and  commitment to  war crimes on  a grand scale is known to  all.

Why Evidence of Iran’s Role in Attack Doesn’t Matter

Who Really Benefits From ‘Iranian Attack’ On Saudi Arabia?

The Saudi created hell in Yemen