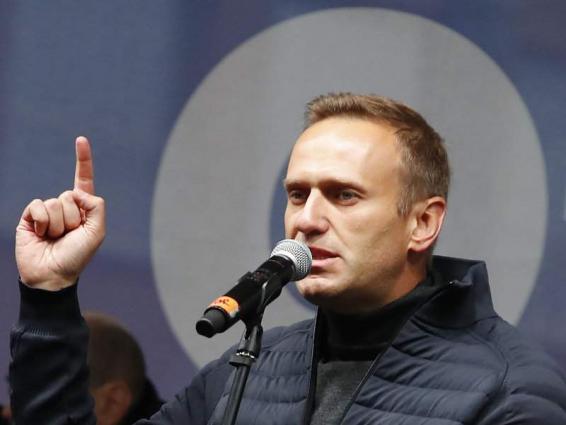 It should be noted that while Navalny is certainly a thorn in the side of Vladimir Putin  and his United Russia party from  an  anti-corruption point of view, and attains mythical  status  in Western  mainstream  media as Putin’s   potential  nemesis leading his  ‘Russia of the Future’ political  party , Nalvany’s  has 3 to  5% support amongst  Russian voters nationally and  by whom he is often perceived as an extremist, means that he is  currently little  of a political  threat to Putin.  However Nalvany’s   supporters in Russia and West allege, “state-run” media ignore him  and the ballot boxes are always stuffed in  Putin’s candiates’ favour. He may however have many enemies in both  government and private corporate Russian circles.

Craig Murray,  ex U.K.  ambassador, whistleblower on U.K  complicity in torture, supporter of Assange and other unpopular human rights issues,  and  now conveniently  likely soon  to  be imprisoned by  the U.K.  government on  some highly questionable charges , outlines below just  some of the  ‘peculiarities’ of the poisoning.

Let us first take the weapon of attack. One thing we know about a “Novichok” for sure is that it appears not to be very good at assassination. Poor Dawn Sturgess is the only person ever to have allegedly died from “Novichok”, accidentally according to the official narrative. “Novichok” did not kill the Skripals, the actual target. If Putin wanted Navalny dead, he would try something that works. Like a bullet to the head, or an actually deadly poison.

“Novichok” is not a specific chemical. It is a class of chemical weapon designed to be improvised in the field from common domestic or industrial precursors. It makes some sense to use on foreign soil as you are not carrying around the actual nerve agent, and may be able to buy the ingredients locally. But it makes no sense at all in your own country, where the FSB or GRU can swan around with any deadly weapon they wish, to be making homemade nerve agents in the sink. Why would you do that?

Further we are expected to believe that, the Russian state having poisoned Navalny, the Russian state then allowed the airplane he was traveling in, on a domestic flight, to divert to another airport, and make an emergency landing, so he could be rushed to hospital. If the Russian secret services had poisoned Navalny at the airport before takeoff as alleged, why would they not insist the plane stick to its original flight plan and let him die on the plane? They would have foreseen what would happen to the plane he was on.

Next we are supposed to believe that Putin, having poisoned Navalny with novichok, allowed him to be flown to Germany to be saved, making it certain the novichok would be discovered. And that Putin did this because he was worried Merkel was angry, not realising she might be still more angry when she discovered Putin had poisoned him with novichok- Craig Murray

Curiously again, Navalny’s poisoning just happened to coincide with an  intense level  of blackmail  and lobbying from  the United States for Germany to  renege on its agreement with Russia to  provide  Germany with cheap  natural  gas via Nordstream 2 pipeline ( to  ensure Germany buys vastly more expensive U.S. gas) and  the current political  debacle occurring in  Belorussia,  where Poland,   the Ukraine and the Nordic states are putting intense pressure on  the Belorussian state to  not sign  up  to the previously agreed political  and military  merging of Belorussia with Russia.

As Southfront notes, it would appear that  the Navalny case and the colour revolution style demonstrations   supported from  those states, has prompted the Belorussian  President Lukashenko; just  recently re-elected on  somewhat dubious grounds after obtaining 80% of the vote!- to  once again  change direction and support the merger with the Russian Federation.

It also  appears somewhat  strange that  Germany has decided that  a Russian national ,  supposedly poisoned on Russian soil,  is the political  business of the German  state. Should Germany wish  to pursue that line of political  enquiry, then  Germany should have  rightly long ago  sanctioned and demanded explanations from the United States, United Kingdom, France and other Western  states for their appalling record of genocidal wars  they they have engaged in.

And one more speculative narrative  explores whether the Novichok accusations are part of a campaign  by  the U.S.  to  ensure the  newly developed  (and rather rushed) Russian COVID19  vaccine, does not  undercut U.S.  attempts (and particularly Bill Gates’) initiatives to  market a vaccine to the world.

All  this  alongside the ongoing attempt by  Western intelligence  agencies  and their mainstream  media “associates” to ‘fit up’  Russia and China  with every possible charge of criminal  activity and human rights violations, so  that  Western  populations can  accept and applaud the loss of access to Russian and Chinese goods, the need for more weapons and even the justification for war. It is important to recognise too, that the linkages between Western  intelligence agencies are very  strong,  and often can be at  odds with  the positions of those in  government, to the benefit of those who  can make money  out of death  and destruction.

The U.S.  and the U.K.  are very much aware that  their economic influence on the rest of the world is rapidly waning, and their historical  methods of violence intimidation and corruption no longer have the power they use to,  with the rise of China as an economic counterweight.

Thus we see  a long term pattern of accusations of the use of “Weapons of Mass Destruction” or other mass human rights violations  against  states the U.S.  and the U.K wish  to  first destabilise and  then  extract   the profits from  that destruction. The list  includes   Iraq,  Syria,  Libya, Iran,  Russia, Venezuela,  China…   Those countries that  continue to  violate human  rights on  a massive scale like Israel, Saudi Arabia, Colombia and many others  are exempt from  that pressure because they are already  within  the US/UK economic sphere . And of course the  genocidal  activities of the U.S. and U.K.  in their endless colonial  wars are simply brushed under the carpet.

Both the U.S.  and the U.K.  know that once China ,  in collaboration with its Belt and Road partners, achieves overwhelming economic ( and military) superiority,  there will be many many British and American  leaders  confronting the International  Court of Justice in the Hague for their crimes and the need for just  compensation for those states they have destroyed over the past  100  years.

Southfront posits some alternative reasons for Navalny being ‘poisoned’ here

Homo Homini Lupus Est: Did Navalny’s Allies Poison The Oppositionist For Flying Too Close To The Sun?

The Navalny case: Poisoning or another occasion to heighten Russo-European tensions?

Novichok and Nonsense: From a Post-Factual to a Post-Logic World

Germany, Not Russia, Should Answer Questions Over Navalny Case