Firstly, it needs to be unequivocally stated that  any  murder, violence or threats of violence  need to  be condemned, and repeatedly  condemned, until  such  actions no  longer occur on this planet.  Violence in any form is a primitive and non-productive way of achieving one’s aims.  Because human beings are  predominantly social  beings,  intra-species violence  cannot create long-term positive outcomes for either party.

The killings by  religious extremists  of Charlie Hebdo’s cartoonists/ journalists and subsequent deaths in other parts of Paris, purportedly because  those cartoonist’s denigrated the Prophet, are an abomination, and certainly appear on the face of it, to be designed to  inhibit   further ridiculing of Islam, or more probably, to  incite   disenfranchised  white  males to  commit crimes against   local  Muslim populations to again  encourage French muslims to  rise against   the French  state.

But there are, in my view, three things to  consider here:

One, is the  equity of the Western public and media response to  these killings in comparison  with  the ongoing murders of thousands  of people in the Middle East by  Western  state war-machines.    Just  one example of this hypocritical  perspective is  the disgusting and appalling  treatment of Palestinians by  the Israeli  state to  which  every  Western  country  has not only turned a blind eye in  the last  67  years, but almost all  have   actively supported the ongoing atrocities against  that imprisoned population.  Where are the “je suis une Palestinian” mass rallies I wonder? or where were those demonstrators when the United States  for instance delivered “targeted strikes’  into  the hotel rooms of    Al Jazeera  journalists  while they  were staying  in Baghdad in the second Iraq War ? These organised Parisian  mass rallies,  with  their  identical  laser printed placards, smack  of hypocrisy , selective judgement and useful  scapegoating.

Secondly, why  is the media so  keen to portray  these killings as organised, premeditated killings by   well-trained terrorists?. Losing your ID card in the getaway car does not particularly strike me as the work  of  a well-honed  hit -squad. More than likely (as with so  many other “terrorist” attacks) , these pathetic young men  were likely supported and encouraged by   (in this case) French intelligence services.  And before you  snarl  about “conspiracy  theories”, it is worth noting that much of   the “terrorist” activity during the French/Algerian war was in  fact  undertaken by French  intelligence;  they  are no strangers to  false flag operations. As The Intercept notes, many Western “law enforcement” agencies have provenly been active in the past few years  in  recruiting and fomenting “terrorist plots for their own ends.

This blog has noted many times the  multitude of advantages to  state security apparatus of hyping up  some “existential” threat  to  the population.  And if, as some reports suggest, the killers had recently been in Syria fighting with the rebels, then they  are most certainly  the product  of Western   tactical  and resource support for anti-Syrian government rebels.

This attack  also comes at a convenient time, when the President of France ,  the inept ‘socialist’  Francoise Hollande, appeared to be weakening in  his resolve to  support U.S. demands for continued sanctions against  Russia because of the  deleterious impacts on  the French  economy of those sanctions.

Thirdly, Charlie Hebdo’s cartoonists were, and are, hardly  the epitome of Western liberal tolerance and fair-play. Their cartoons are often racist, and inflammatory. That is of course, no 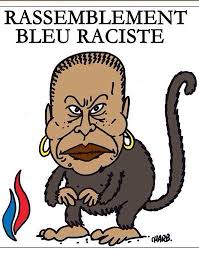 excuse for violence against  such  bigots, but neither does it provide a rationale to  eulogise such people.  Western democratic values presume that  everyone has the right to insult anyone  on the basis of their actions or beliefs, with  the opportunity to  address  outstanding concerns in  a court of law.  This is largely a civilised approach to  working through  dis-harmony: one to which  Western governments  publicly  subscribe to in the media, while  in reality  wreaking indiscriminate destruction and murder in other parts of the globe. The assumption of a  “free” media in the West, is  however, by and large, true.  Notwithstanding  Slate’s narrative that   “despite its 18th-century constitutional provenance, the First Amendment did not play a significant role in U.S. law until the second half of the 20th century. The First Amendment did not protect anarchists, socialists, Communists, pacifists, and various other dissenters when the U.S. government cracked down on them, as it regularly did during times of war and stress, non libelous  anti-government points of view, are  in most cases, allowed free dissemination. Western governments rely on the fact  that   wide spread dissemination of news requires large amounts of  financial resources. Those  financial resources, by definition, come from  those who  support the status-quo. Non status-quo points of view are therefore in the vast minority and largely invisible to  the public.  Status-quo  views,  even when  blatantly  and obviously lies, can  steam-roll  the public to  accept them  as truth through  the sheer volume and multiple sources of the “un-truths”.  George Monbiot’s  recent  examples on Canadian  and UK media’s “selective journalism” illustrates this argument well.

Charlie Hebdo  journalism falls into  that category of being some what  right -wing and subtly supporting the  conservative status-quo, with  simplistic  judgements of those who  are different from  “us”. Interestingly however, Stéphane Charbonnier, who was murdered in the attack, described the newspaper’s positions in 2012 as left-wing, secular, and atheist.

I Will Grieve. I Will Laugh. But I Am Not Charlie

15 Signs The Charlie Hebdo Attack Was A False Flag

In Solidarity With a Free Press: Some More Blasphemous Cartoons